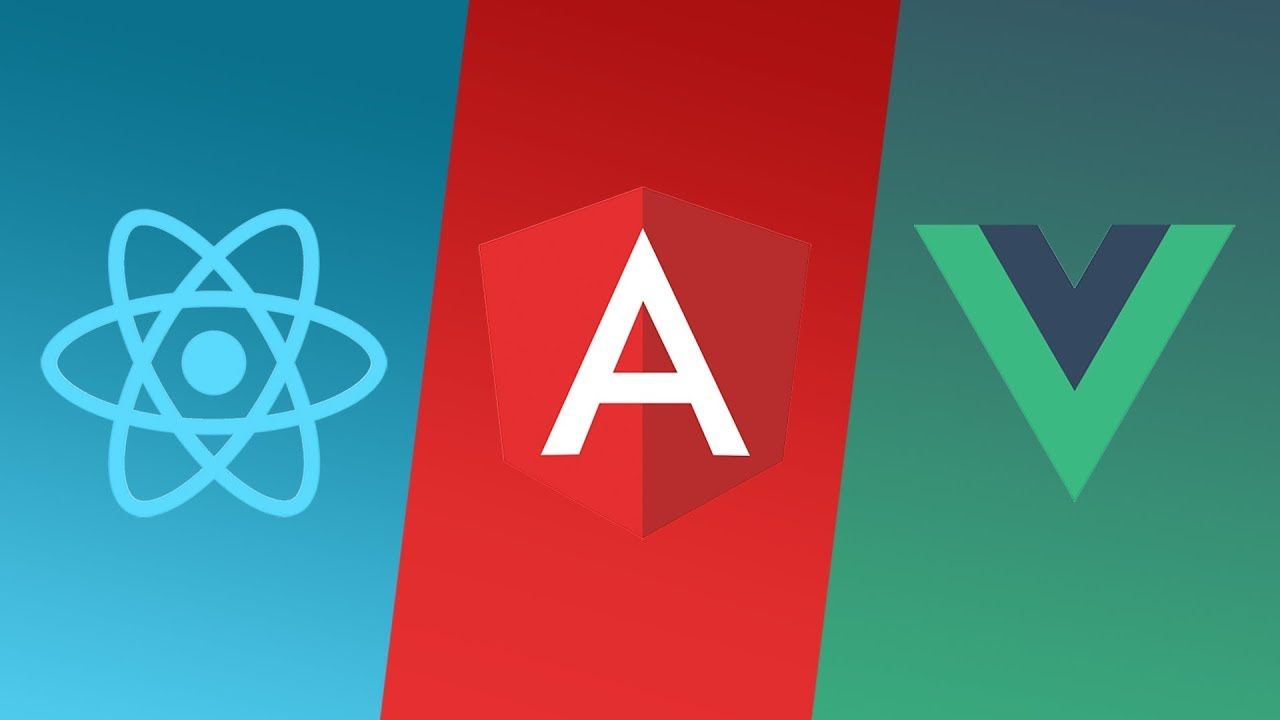 Developed & maintained by Facebook React is a JavaScript library for building UI components for web applications. React has been the most popular framework used for building modern single-page applications of any size and scale

Angular is developed and maintained by Google, a Typescript based javascript framework, and has been enormously popular due to its object-oriented approach and architecture.

Vuejs has been created by one of the Google employee Evan with community support and has been positioned well against the two tech giants in the competition. Vue has been fast-growing javascript frameworks for frontend development due to its ability to build adaptable user interfaces. 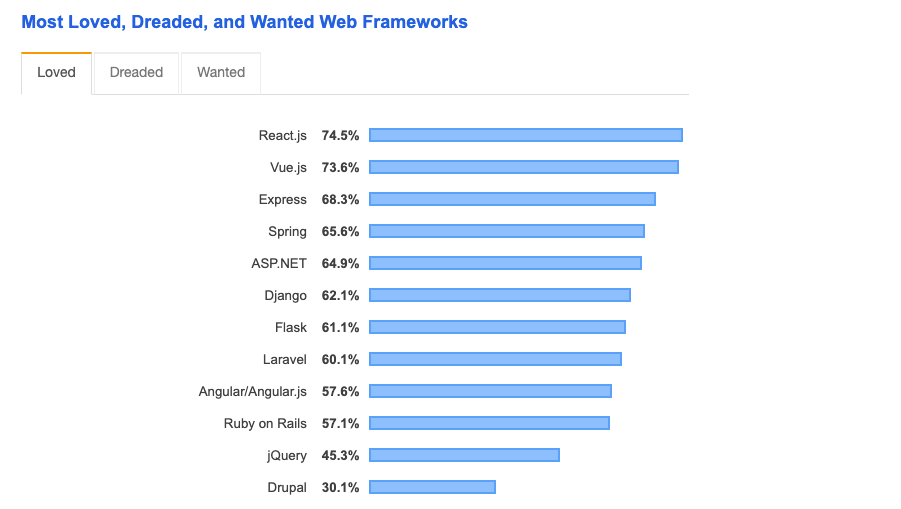 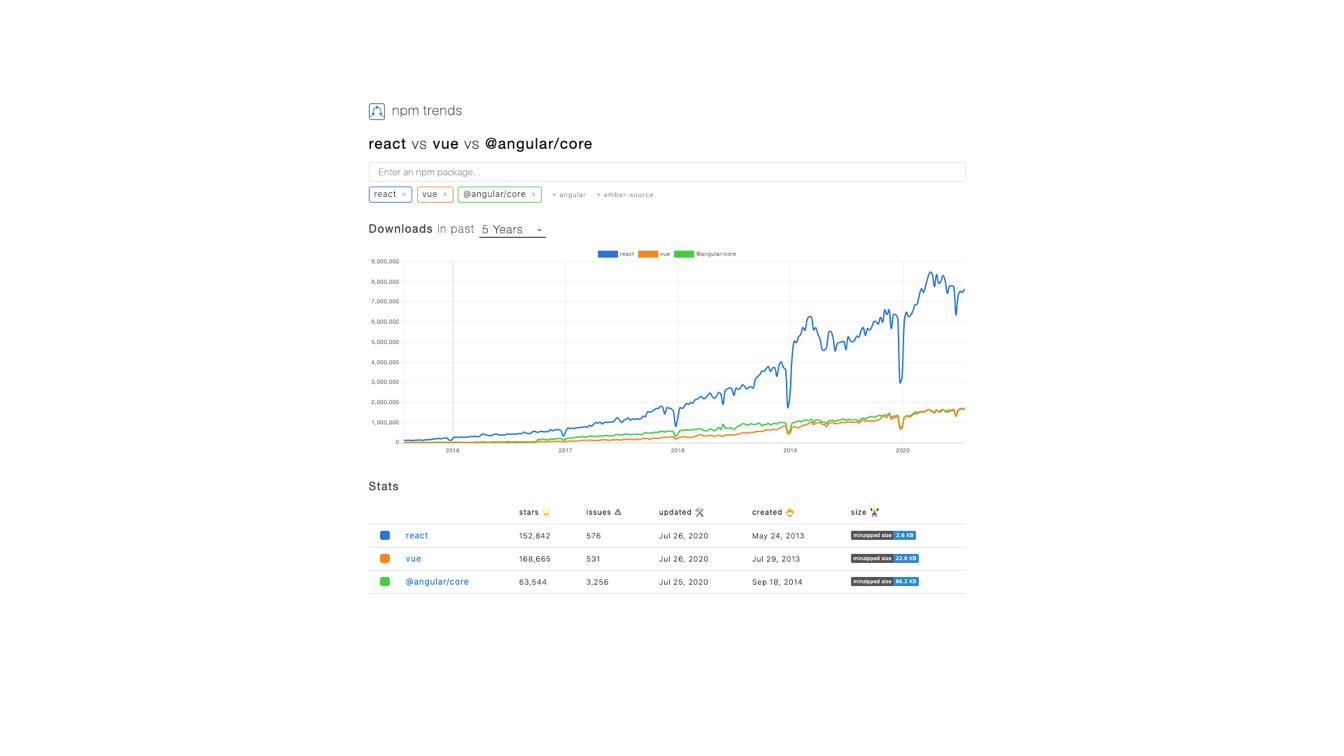 With all the trends showing, React is leading the trends and that's the reason companies like Facebook, Uber, Netflix, Twitter, Udemy, Paypal, Reddit, Tumblr, Walmart are using React. Angular is the second one in the trends with Google primarily using for its web platforms along with Forbes, The Guardian, Upwork, and many more. Vue has been the latest addition in the market it has been growing rapidly. GitLab & Alibaba are prominent using Vuejs.

React uses the Virtual DOM and enhances the performance of any size of application which needs regular content updates. React is based on a single-direction data flow. This will provide better control over the entire project. Angular uses real DOM and a Two-Way Data binding process that replicates all the changes made in the Model into the views in a secure, efficient, and intuitive way. Because of the two-way data binding, it provides an efficient coding structure and is easy to work with. Vue has been the latest addition hence it consists of all the good things of React and Angular; therefore, it utilizes the virtual DOM to deliver high performance and memory allocation.

React & Angular are backed by two big companies Facebook & Google, there’s no doubt about the growth of both these frameworks. In both frameworks, updates and releases are frequently published but they are well maintained when it comes to migrations. Vue is still in an open-source community, however, one can understand the fact that competing with Facebook & Google is not an easy game and Vue has made a position against them which shows the love of the framework by the community.

Vue has the easiest learning curve among the three. It’s because it’s closest to the JavaScript basics and HTML. React is also relatively simpler but when start using third party libraries it needs more strong javascript programming skills. Angular is the steepest one because of its architecture, TypeScript language, use of component & modules, dependency injection like concepts which may not be very easy for some. However, angular consists of powerful features that make developers use certain coding patterns that help them in building large applications.

React and Angular with big brands are promising, React being the early starter has made deep roots in the market hence the adoption by the business and dev communities is more. Angular with TypeScript in build support and MVC architecture gives better confidence to develop large projects. Vue is easy to learn and provides the best of features of both React and Angular could be the one reason you could choose Vue. React is much loved by javascript lovers i.e. if you want all javascript you can go with React. If you come from a strong object-oriented approach and like Typesafe language with MVC architecture you can go with Angular. Pn the other side if you like a simple framework with javascript and Html support with a similar performance you can go with Vuejs.